Seven persons have died in an accident involving an OA and VVIP bus on the Konongo-Kumasi Highway.

In an interview with Citi News, the Motor Traffic and Transport (MTTD) police commander for the area, DSP Steven Paa Yeboah said the injured have been admitted at the Komfo Anokye Teaching Hospital, whilst the bodies of the deceased have been deposited at the Yawkwei Government Hospital.

“At 11:30 I received a call that there is an accident on the Konongo-Kumasi Highway. I rushed there with my men and upon arrival, we saw two buses – one OA and one VIP bus in the middle of the road blocking traffic. So we moved the injured persons to the hospital whilst we tried to take out those who were trapped in the buses. On the spot, we recorded five deaths and two died later at the hospital.” 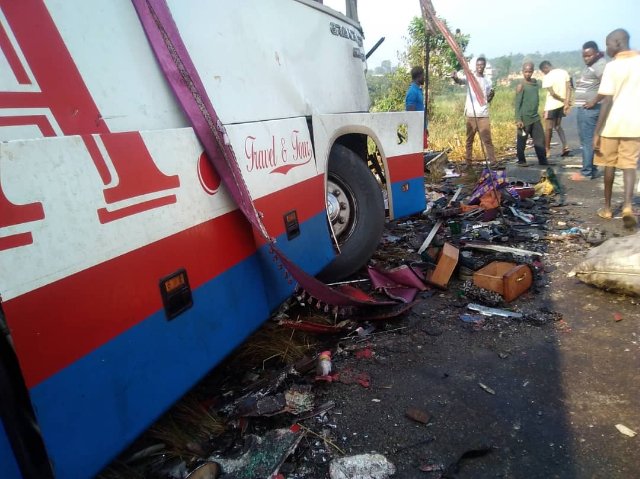 Before the celebration of the Christmas festivities, the National Road Safety Authority (NRSA) was hopeful of reducing road accidents in the country through the enforcement of safety standards.

Over 2,000 deaths have been recorded between January and November 2019 by the Authority, a figure which it says is a little higher than the previous year.

Speaking to Citi News, Director of Planning and Programming at the Authority, David Osafo Adonteng said they will ensure all road laws are adhered to.

“Every institution that is responsible for ensuring that vehicles on the roads are safer and are roadworthy are also going to ensure that those standards are complied with.”

The Authority had earlier cited high levels of indiscipline on the roads as a cause of the high number of recorded deaths in this year.

According to the Authority, 2,083 lives were lost through road accidents between the period exceeding the estimated figure of 930.

In a bid to reduce road crashes, the Akufo-Addo administration approved an action plan aimed at making roads safer.

The plan was to focus on sensitization, law enforcement and improving road signages.

The government committed to providing at least GHS 335 million a year to the Ghana Highway Authority, Department of Urban Roads and Department of Feeder Roads to provide signage and road marks over a three year period.

Wizkid To Union With Tiwa Savage

Northern Region: 2,765 Girls Dropped Out Of School Due To COVID-19 – Report

Date For The Payment Of Teacher Trainees Allowance Arrears Announced

Northern Region: 2,765 Girls Dropped Out Of School Due To COVID-19 – Report

Date For The Payment Of Teacher Trainees Allowance Arrears Announced